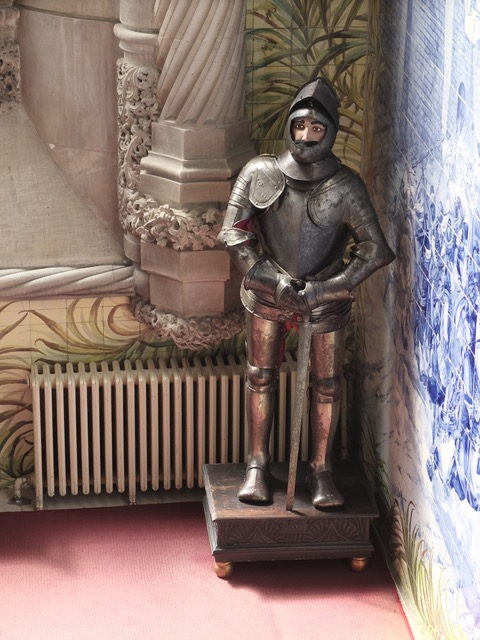 My own and most recent flight of fancy was actually a fancy flight. It’s amazing how much better champagne tastes when it’s free and served in front of equally deserving airplane passengers who have to suffer the indignity of flying coach. Full disclosure, and I’ll bet you already guessed this, what took my husband and me to the front of the plane were mileage points. Lots and lots of them. We were headed to Portugal and Spain, and what better way to get the fiesta started. “Salud!” I said to my husband before he secured his noise-cancelling headphones on his skull. From then on, it was a most pleasant way to spend 24 hours… eating every thing the flight attendants could place before me, watching all the movies I’ve missed since 2010 and clobbering my husband’s arm every now and then to let him know the flight attendant was waiting in the aisle for his dessert choice. 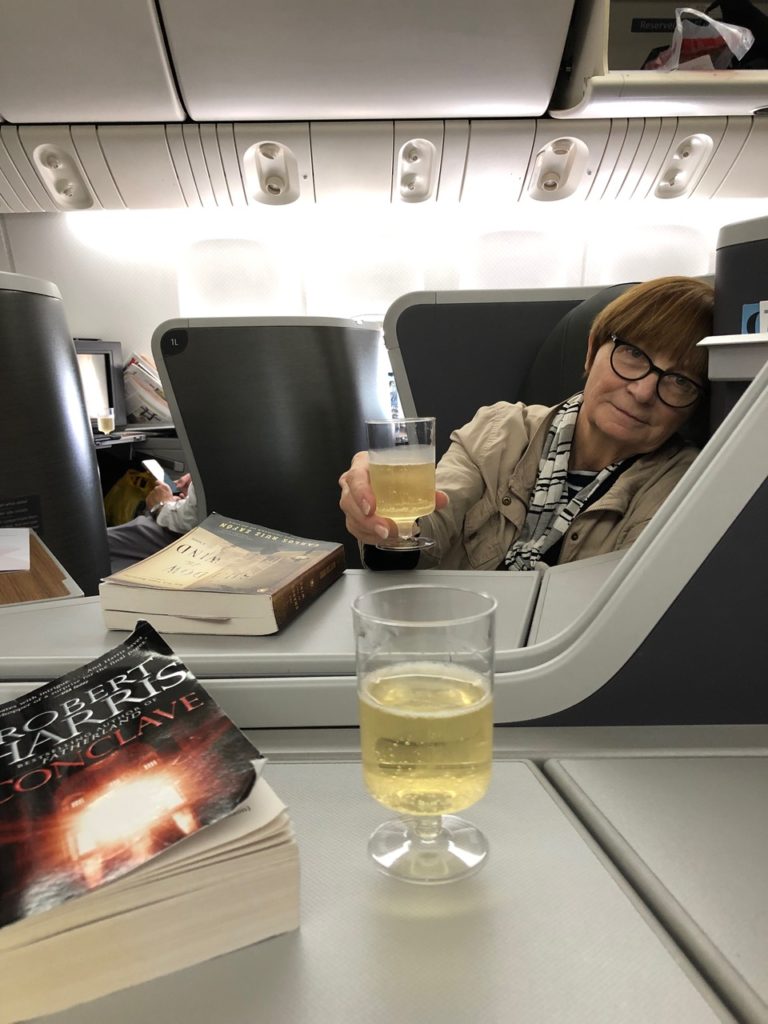 We had long hoped to visit these two countries to experience what every traveler yearns for regardless of the particular destination: rich experiences and thrilling adventures, local food delicacies and robust wine, scintillating new acquaintances and fresh takes on our own 40-year marital association, and plenty of ATMs with limited foreign transaction fees. 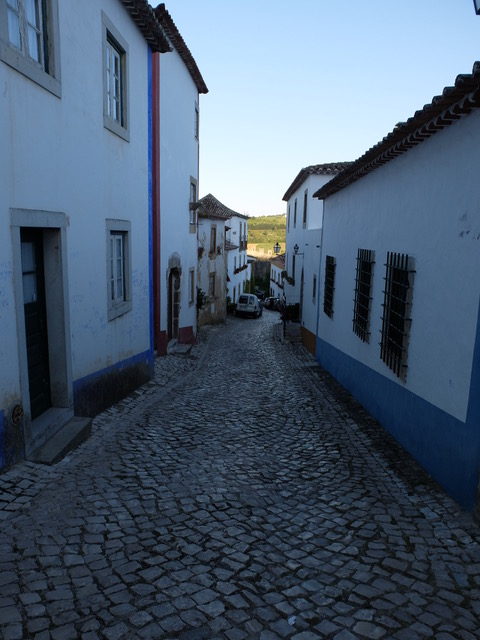 The windmills of our mind kept us alert for any and all razzle-dazzle, Iberian style. We didn’t don protective armor—such as Quixote clanked around La Mancha in–but we were on the hunt for signposts that might lead us to our next escapade. All figurative signposts were what Don Quixote mistook as gospel while Sancho pointed out the actual directionals to keep them moving forward. Our journey, equally quixotic, often placed us smack dab in harm’s way or left us confused and out of sorts. There were other days where our luck was rewarded in ways that if I were at all religious I would categorize as heaven sent. Once we put ourselves in the manos of providence, we turned off Google maps (batteries were running low anyway) and started to pay more attention to the signs right in front of us. Some were in luscious Portuguese that made me want to release my inner Girl from Ipanema; others were written in Spanish. Oye Como Va I screeched at my husband when we missed the exit. We nearly didn’t get off the bus at the correct depot when the town was announced in Basque (if you know a Fado song, throw on a cape and get to moaning). 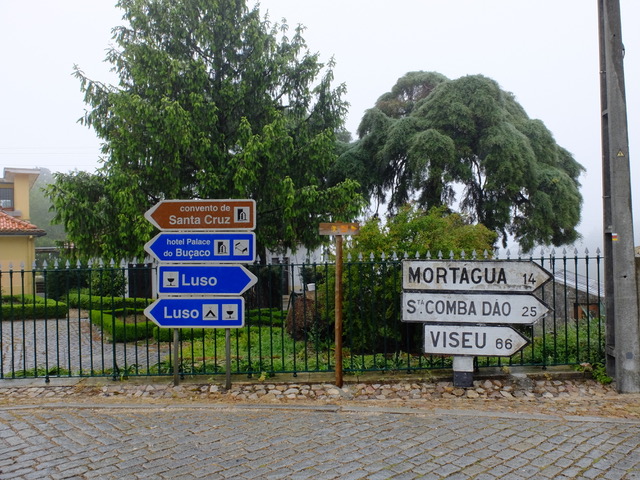 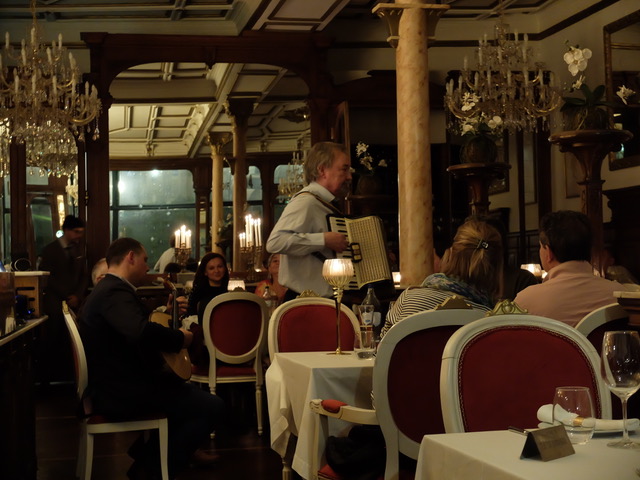 Language is the great divide, isn’t it? One longs to be able to understand and to be understood. The couple at the next table wants to hear about our travels, or about San Francisco, or how the hell Trump could be president but we can only answer with gestures and two phrases sputtered in present tense with the vocabulary of a six-year-old—if that child had literally never said a complete sentence ever. And, that was in Spain. In Portugal, I put a nice spin on my pronunciation of obrigada (translation: thank you–when spoken by a female). I mean it. I was a natural judging from the number of deferential waiters who responded, “Oh, do you speak Portugese?” But, that’s where conversation in any language other than English ended. Always polite but painfully brief. Check please. Obrigada. 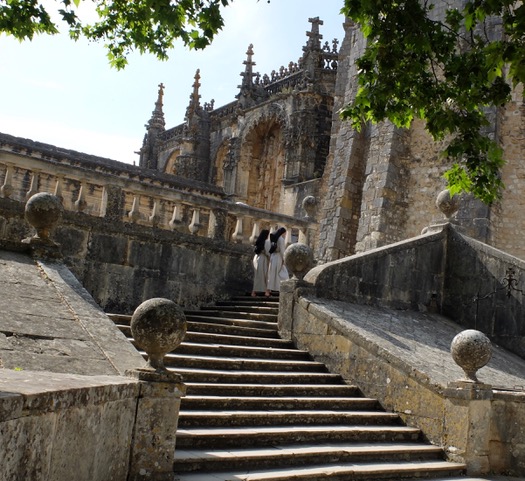 Despite experiencing the chasm between what was spoken and what we could understand, it was exhilarating to discover that one of our favorite pastimes while visiting these two countries was to explore the many bookstores found in nearly every city, regardless of the town’s size. Being around books was soothingly familiar and made us feel for a few brief moments as if the country and its culture were more accessible than we thought. The stores’ shelves were crammed with so many volumes from every literary genre that I could feel heat radiating from the walls. Sliding library ladders were in constant flight down the side rails of the shops as customers sought a better view of their desired book. Some bookshops were long and narrow; some were architectural treasures tucked in between two austere storefronts. Still others were two- or three-stories high. Not a single bookstore housed a coffee bar. If you needed a box of stationery or a greeting card, you were out of luck. In Porto, Portugal, Livraria Lello, is said to be the bookshop that inspired J.K. Rowling when she was writing the first book in the Harry Potter series. Here the line to get into the store wound around the shop, out the door, and down the block. Very Hogwarts but there wasn’t enough magic in the universe to plop us in the front of the queue. We went for a beer instead. 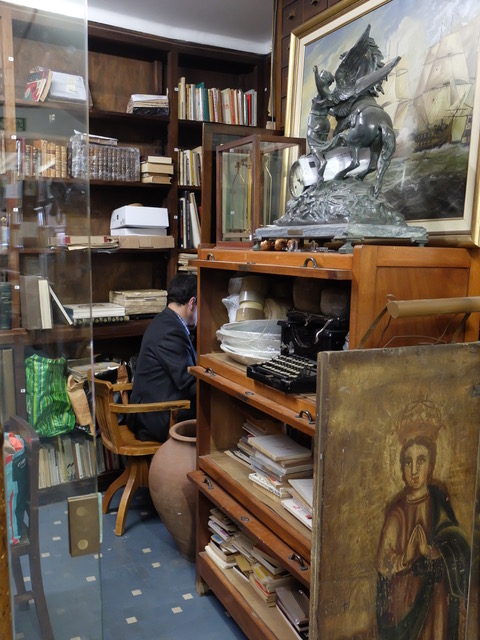 Way back in December of last year, for my birthday, my sweet and dear friend, Jany, gave me a book entitled, Shadow of the Wind (‎La Sombra del Viento), by Carlos Ruiz Zafón. Jany had no idea that we were planning a trip to Barcelona but without a moment’s hesitation, I tucked that enticing book into my suitcase. It is the story about a book, its author, and its reader. The book catapulted me into the city I was now visiting as if I alone were invited to pull back the thick and heavy drapery to eavesdrop on tumultuous relationships and unrequited lovers. As if blowing off the dust and swatting at the cobwebs in an abandoned shed, every day I found myself in the places where the book’s characters walked, ate, drank, loved, and died. 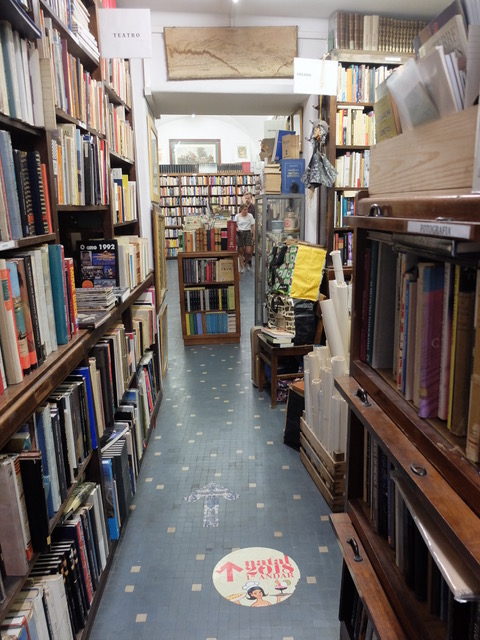 And, then I met Federico. The young man with elegant posture and a strong jaw worked at the hotel where we were staying and when he caught a glimpse of my book, he expressed great interest in it. He explained to me that he is an artist and has illustrated three of his mother’s novels. With great excitement, he wrote down the name of the bookshop where I could purchase one of his mother’s books and then he would meet me at the hotel’s front desk the day before we were to leave to present to me the two other volumes. In the meantime, he would contact his mother and tell her about me (and my blog). 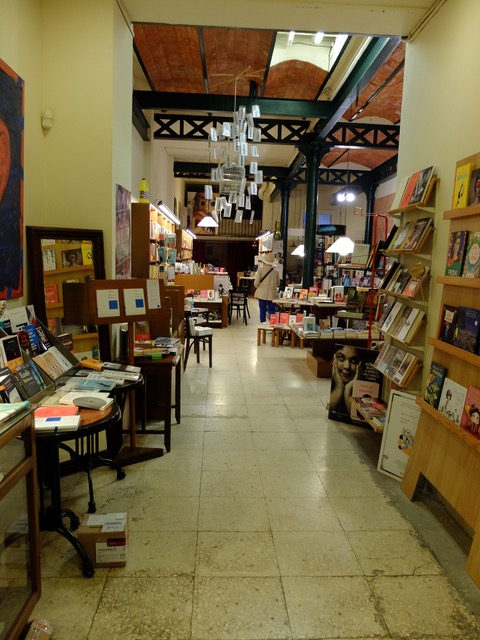 My husband and I had a promising field trip ahead of us. For, as you know if you have visited Barcelona, the alleys and streets resemble a plate of spaghetti. It’s easy to see where Gaudí, for example, would understandably eschew straight lines when disordered hairpin turns and voluptuous curves are much more beguiling. I began to wonder if this is why Spaniards eat dinner so late…it takes forever to find the restaurant. We plodded on and on in search of the bookstore Liberia Proleg, a feminist bookstore, which Federico promised would satisfy both my curiosity and my shopping list (buying his mother’s book) . I have a damn good sense of direction and even with the help of one confused Google map concierge, we were hopelessly lost. We stumbled into an alley with adorable shops but not one a bookstore; we passed flower stalls, tapas bars, museums. It was getting late, but I held out hope that if one doesn’t eat dinner until 10pm surely we could count on the bookstore being open until 8. 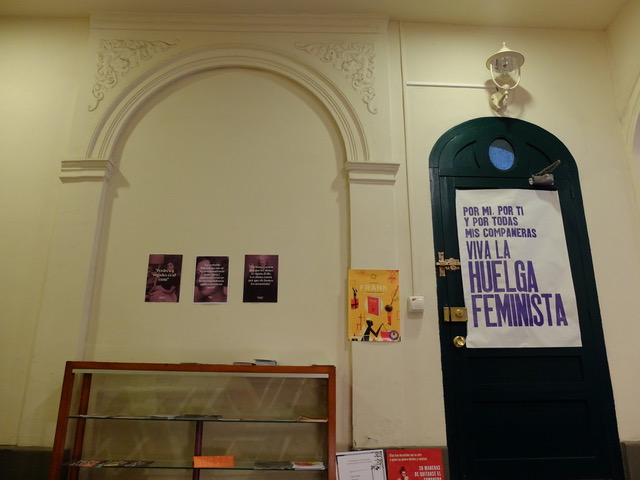 And then we found it! I threw open the door of the tiny Barcelona bookshop as if to proudly announce to the otherwise distracted owner, “Estoy aqui!!!!!” Instead of the welcome response I was expecting, she was smoking and on the phone. I feigned self reliance as I looked over her stock. The other option would have been to stand in front of her as I waited for her to help me. Curls of cigarette smoke drifted my way as I began to pace up and down the one aisle in the store. All the books were in Spanish, of course, but some covers were vaguely familiar to me based on the cover art. Like going to one’s high school reunion after 50 years, you know you recognize the person in front of you but age has taken its toll, and you’re just not sure if you do know who it is after all. The owner wasn’t even taking a breath as she talked on the phone, so I perused the shelves looking for familiarity. There was the Anaïs Nin book; ah, I recognize Marge Piercy’s work. Sylvia Plath is looking impressive in Spanish. Get off the phone, I kept thinking. Instead she lit another cigarette. 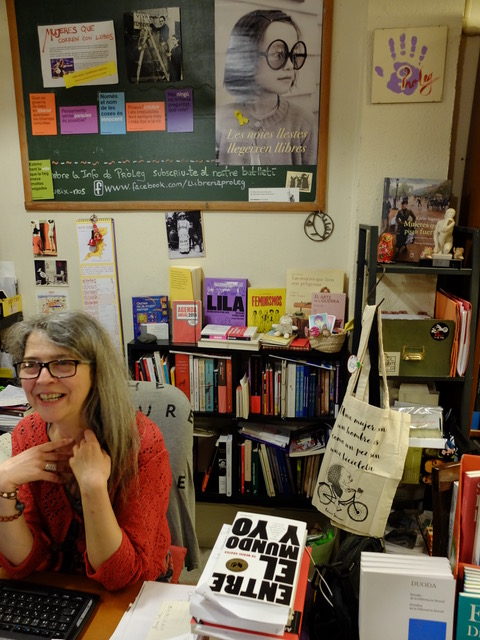 Finally, she hung up. Stubbing out her smoke, she asked if I needed help. I said I did and she replied, “Mea culpa.” Say no more, I thought. But, I had come all this way and I was on the mission to buy Federico’s mother’s book. Shake off the impressive Latin from the woman and stay focused, I thought.

“Do you have the book by Gloria Arcuschin, Libro de Juegos? I asked in English.

“Of course I do,” she replied. And we were off to discover much about each other and about her relationship with both son and mother Arcuschin. And, finally, we were able to discuss the book I was reading, Shadow of the Wind. I felt a chill in the otherwise stifling air of the bookstore when the owner told me her name…Nuria. Hers was the same name as the main female character in my book. Once she learned that I was from California, Nuria told me of her sister-in-law who was currently living in Saint Suzanne, California—by which we finally realized she meant Santa Barbara. And, with the owner’s facile language skills, she told me that the title of Gloria Arcuschin’s book, Libro de Juegos, translates to Book of Games and not what I had thought: Book of Juice. 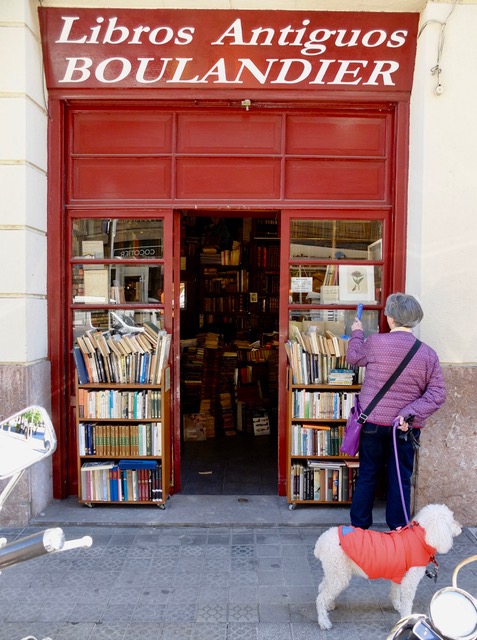 I now own three books by Gloria Arcuschin and illustrated by her son, Federico Mañanes. All of them inscribed by Federico. In one, Federico wrote:

It’s been amazing—meet, talk and share with you in different and surprising way. With love, Gloria and Federico, May 2019, Barcelona 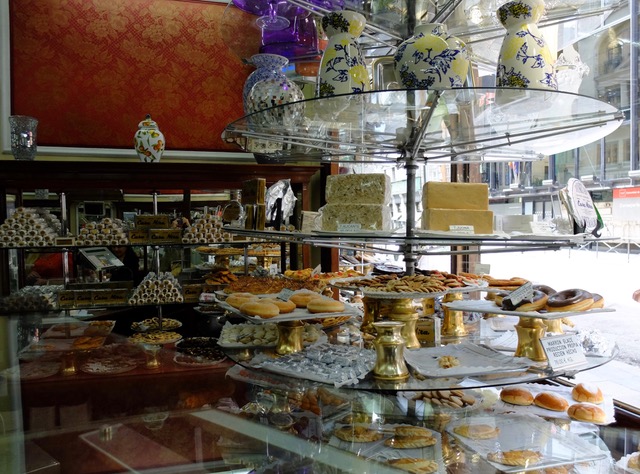 My husband and I found our way through the intertwined streets of the Spanish city to an excellent dinner. I drank just enough Cava to toast our success, to feel my weary feet relax and to be able to converse with my European neighbors at the table next to us. I did not want to drink too much because back in my hotel room I had a book to finish and another three to begin. We would search the city once more, this time for a bookshop where I could buy a Spanish-English dictionary. It occurred to me that I might pick up a Basque-English dictionary too so I never come close to missing another bus stop.